LINNÉA SALLAY – ABOUT THE ARTIST

Linnéa has a background from Adolf Fredrik’s Music School in Stockholm and violin studies at Nacka Music School. She has studied Opera at the University of Gothenburg and at Kulturama’s “Operastudio” in Stockholm. She has performed in many soloist roles in Sweden. Her debut was as Cherubino in The marriage of Figaro at the Royal Opera in Stockholm. Other scenes in Sweden where she has performed are The Vadstena Academy, The Norrlands Opera, Drottningholm Palace Theatre, The Berwald Concert Hall, Stockholms Concert Hall and many more.

In later years Linnéa has had operetta roles with the group “Opera con Grazia” with performances in many cities in Sweden. She has performed as a soloist artist together with many orchestras and choirs. She has also participated as a mezzo- and alt-soloist in churches both in Stockholm and nationwide. She has cooperated with many eminent conductors, such as Sir David Willocks, Charles Farncombe, Arnold Östman, Mark Tatlow, Andreas Spering, Siegfried Köhler, Jonas Dominique and Mathias Kjellgren.

Linnéa has participated as a soloist in Swedish and German television and had several soloist performances in churches in Germany and Great Britain.

Linnéa Sallay runs the OperaCabaré-group ”The Diamonds” together with the soprano Rita Saxmark since 2004. They have produced their own shows all over Sweden. The group has performed at several theaters as well as cruise ships in the Baltic Sea.

During the years 2003-2013 Linnéa acted as the musical leader for the Taube Choir in Stockholm, with concerts nationwide and yearly at the open-air Museum Skansen. The choir and Linnéa produced a joint CD called ”Dansa min vän & sjung!” (“Dance my friend & sing!”). 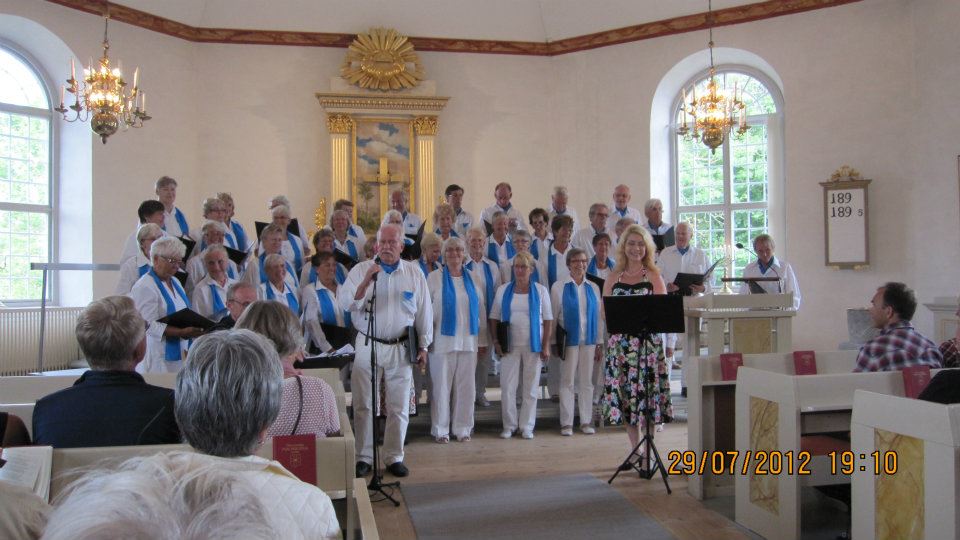 Linnéa performing with the Taube Choir

Today Linnéa is active as a freelance singer performing together with her violin. She is a very versatile artist and performs in different genres, like opera/operettas, musicals, ballads and folk music, evergreens and hit songs.

She cooperates with the pianists Jan-Erik Sandvik, Carina E Nilsson and Lotta Hasselquist Nilsson, the organist/pianist Mathias Kjellgren, as well as the accordion players Åsa Arvidsson and Tuulikki Bartosik.

Many organizers appreciate the convenience of engaging an operasinger who also can play popular tunes on the violin at the same event.

Linnéa has often been called both an enthusiast and an entrepreneur. She often takes the initiative to shows and cultural experiences and has a wide network of contacts for every occasion.